What Are Teacher Training Schools? 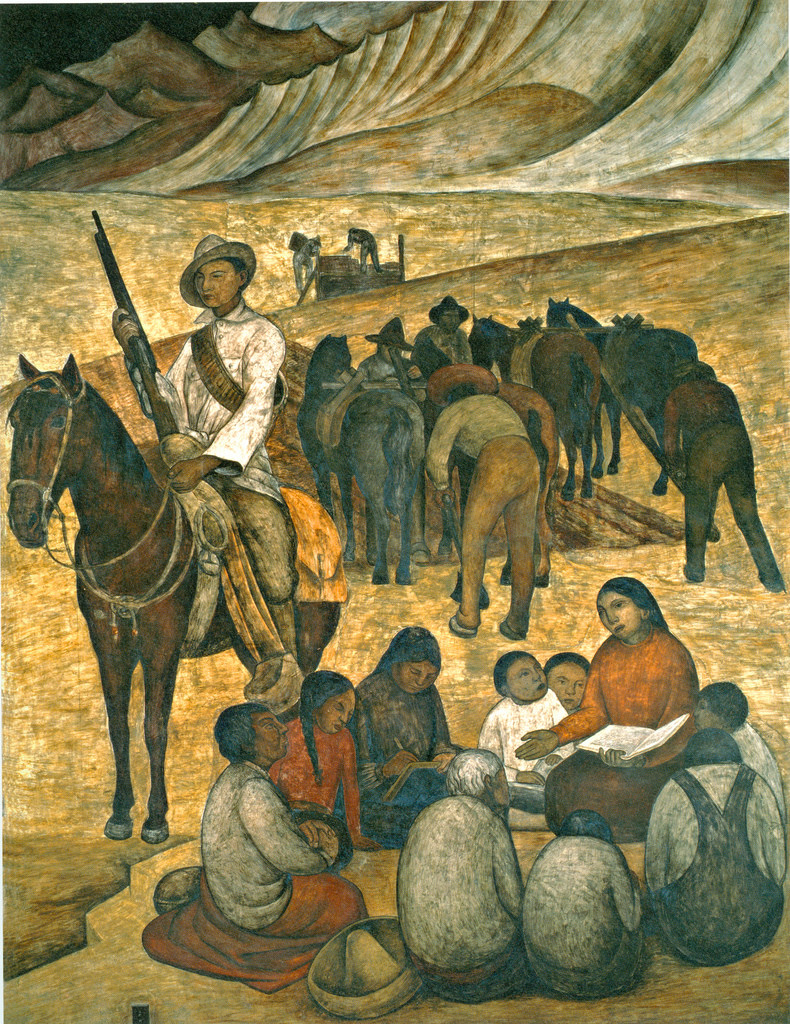 The Rural Teacher by Diego Rivera (1923)

The reform to the 3rd article of the Mexican Constitution stated that education was free, compulsory, and secular.

“Three major aims stood out. First, teachers often helped communities with the logistical details involved in gaining ejido lands [lands owned by the community]. In this way they linked the abstract ideals of nationhood taught in their classrooms with more material benefits. Teachers thus personified the social justice promised by the revolutionary government. At the same time, the SEP [Secretary of Public Education] was also one of the primary instruments of national integration. Although Mexican intellectuals could blur the lines between campesinos [peasant rural workers] and indígenas [people from the first nations], they were adamant that they would not institute a U.S.-style system of reservations or segregation.

Moisés Sáenz, an anthropologist who became the undersecretary of education, affirmed that the two goals of rural education were ‘the incorporation of the great mass of indigenous people into the Mexican family, [and] the formation of a rural spirit.’ Finally, the teachers were expected to instruct communities on the best farming methods.

The centrality of agriculture to the educational endeavor is perhaps best expressed by the head of the cultural missions, Rafael Ramírez, who proclaimed that since ‘it is agriculture that is one of the main concerns in the lives of campesinos, rural education needed to capture that interest and become agricultural by nature’.

To train these teachers, the government established the first State Normal School in 1922 in Tacámbaro, Michoacán.”

The reform to the 27th article of the Mexican Constitution centered in land reform, which gave the right to the land the peasant workers who lived in extreme poverty.

“The government had quite deliberately established some normales on expropriated haciendas, giving the schools an air of poetic justice. To drive the point home, even those that were not built on old estates were constructed to resemble haciendas. While persistent underfunding made for an austere existence, the facilities themselves were extensive and included dormitories, dining halls, theaters, adjacent housing for teachers, farmlands, barns, silos, metal and carpentry workshops, as well as sports facilities that often included swimming pools.” (344-5)

Excerpt from the chapter “Rural Education, Political Radicalism, and Normalista Identity in Mexico after 1940.” By Tanalís Padilla in Dictablanda. (344-5)

Directory for all the Teacher Training Schools in Mexico

The Rural Teachers' Colleges in Mexico are called "Escuelas Normales".

This link will take you to the directory of all the Escuelas Normales in México.

You can find in this directory:

During Avila Camacho's presidency (1940-1946), funding was cut, several schools were closed, and the curriculum was standardized to be the same in both urban and rural schools. By the end of his term, only 18 schools remained.

In 1969, president Gustavo Díaz Ordaz (1964-70) closed 14 of the 29 remaining institutions. This sparked protests from the students who saw this as a direct attack to students’ self governance, especially after the Tlatelolco Massacre.

In 2003, there were a total of 20 Rurales Normales: 10 schools for males, 6 for females, and 4 coed.  Full time faculty was reduced. In the same year, the school Mactumatzá, in Chiapas was closed and the scholarships for the students were eliminated.

In 2011, state police killed 2 Ayotzinapa Students while they were protesting in the El Sol interstate highway in Guerrero.

History of the Formation of the Current "Normales Rurales"

The Rural Teachers' Colleges (Normales Rurales) started as Regional Normal Schools and Central Agricultural Schools, which were built in the early 1920s.

The Regional Normal Schools should train teachers who could, in little time, teach reading and writing and introduce new agricultural techniques. The Central Agricultural Schools were formed as a project that wanted to make Mexican agricultural production better with the introduction of modern machinery and a cooperative organization.

At the beginning of the 1930`s these two institutions merged and became the Regional Campesino Schools. These had a 4 year curriculum and it formed both rural teachers and agricultural technicians.

In order to be admitted to these schools one had to not have the means to go to regular University (that is, they had to be poor). The cooperative made self-reliance a possibility, which would also complement the needs of the nearby communities.

The agricultural nature and self-reliance of these schools made them natural enemies of caciques (local overloard) and landowners of Haciendas, who relied on the exploitation of the campesinos.

Between 1941 and 1969, governments focused on urban and industrial modernity, leaving behind the agricultural project.

In 1926 the Regional Campesino Schools were changed to Normales Rurales.