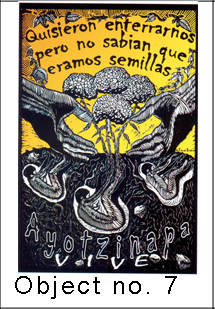 On 26 September, 2014, in Iguala, Guerrero, state police opened fire on three buses transporting students from the Normal School on their way to a protest, killing three students and three more bystanders. Forty-three students in total were detained and subsequently disappeared by the municipal police. The next day the lifeless body of Julio César Mondragón Fontes, one of the students kidnapped by the police, was tossed in the middle of a busy street. His face and eyes had been torn off. The Mexican government immediately denied involvement in this act despite its taking place amid continued efforts to suppress rural Normal schools, and the proven links between security forces and crime syndicates.

Both the local and the federal government have presented contradicting versions of the facts. Since then, Los otros desparecidos, a civilian group lead by Miguel Angel Jiménez Blanco, started looking for their disappeared. This group alone has unearthed over fifty clandestine graves with nearly two hundred bodies in the municipality of Iguala, but none of them corresponded to the forty-three students. After many threats against his life, Jiménez Blanco was murdered on the 8th of August, 2015.

The Ayotzinapa Crime Against Humanity has triggered a wave of protests and outcry in Mexico and all over the world. The 26th of every month has been designated a global day of action and solidarity for Ayotzinapa.

The ongoing proclamation continues to be: “You thought you could bury us, but we are seeds”.

A short documentary about Guerrero and Ayotzinapa (7min 10 seconds)

The New Yorker produced this short film 6 months after the forced disappearance of the 43 students of Ayotzinapa. The families of the missing students talk about how they cope with the loss of their loved ones and the situation in the mountains in Guerrero. The images are based on the work of photographer Black Matt (supported by a grant from the Pulitzer Center).

If you want to see a slide show of Matt Black's images click here.

"Mexicanos al grito de guerra" is a song inspired by the first stanza in the Mexican National Hymn. 30 Latin American musicians and artists composed, produced, and recorded the song. All of the royalties collected are intended exclusively for the families of the 43 disappeared students from Ayotzinapa.

The Names of the Victims

The names of the 43 disappeared students from Ayotzinapa are:

Confirmed dead on that day:

Police also shot at another bus of football players (with no relation to the Ayotzinapa students) killing:

Ayotzinapa student, Aldo Gutiérrez Solano, was also shot on the head by police on September 26, 2016, but he remains in a coma to this day.

2014, September 26: Students of the Rural Teachers’ College of Ayotzinapa go to the city of Iguala to collect money for their school. This had been an annual tradition. However, this time, municipal police opens fire on buses where the student teachers and a professional soccer team were, killing three students and three bystanders and injuring 25 people. Forty-three students are detained/disappeared by municipal police. Further investigations will claim the detention was a concerted effort with the Guerrero Unidos Cartel, with the acquiescence of the 57th Infantry Battalion of the Mexican army, and following the orders of Jose Luis Abarca, the mayor of Iguala, and his wife, María de los Ángeles Pineda. The next day, the body of one of the students, Julio César Mondragón Fuentes, is dumped in the middle of a busy street. His face and eyes had been torn out.

For Artists’ portraits of the 43 college students

October 4: Mass graves are discovered. The remains of at least 28 people originally thought to be the missing students are removed from mass graves on the outskirts of Iguala.

October 6: Four more grave sites are found. DNA testing ultimately proves that none of these bodies were those of the missing students, igniting hope that they might still be found alive.

October 17: Thousands march demanding the students be brought back alive.

October 22: Movement Global Day of Action for Ayotzinapa grows in Mexico City and around the world calling for return of students. Attorney General Murillo Karam confirms in a press conference that Mayor Abarca and his wife officially ordered the police attacks on the students.

For Poets for Ayotzinapa, “These poems are a refusal to let disappearance become a weapon”

November 7: Attorney General Jesus Murillo Karam announced the missing students are dead after detained members of the Guerreros Unidos Cartel confess to executing the students and burning their bodies.

Human remains presumed to be the students are found in plastic garbage bags in a river in Cocula, a town near Iguala. The bodies are so badly burned they have to be sent to a special lab in Austria for identification. (The Lab will conclude that the methods for collecting data were not correct and they can’t give a conclusive report).

At the press conference, which lasts more than an hour, Karam plays taped confessions of the three detained gang members who show obvious signs of torture. In the tapes they describe burning some of the students alive. At the end, Karam takes questions from the press, but ultimately cuts the conference short by saying “Ya me cansé,” or “Enough already, I'm tired.” Hashtag #YaMeCanse is adopted for the demand of justice.

Parents and families of the missing students reject this account due to a lack of scientific proof.

At least 19 mass graves are discovered in the area. Locals who lived near the mass graves say the area was a well-known dumping ground for corpses of those killed by drug cartels.

November 20: Protests are conducted in Mexico and cities in several countries including the U.S., Argentina, Chile, Spain, Hong Kong, and England. Hashtag #AccionGlobalporAyotzinapa follows these protests.

For the bilingual edition of Ayotzinapa: Forced Disappearances, a book that collects the voices of the people in the protests and includes more about the case

December 5: As a reaction to the excessive force used by police in the protests, the head of Public Security in Mexico City, Jesús Rodríguez Almeida, quits.

2015, January: Three more mass graves are found in Iguala by the group “Los otros desaparecidos,” a civilian organization who is also looking for their disappeared. The State does not collaborate with them.

February 28: 601 bodies have been found in 174 mass graves. 80% of these bodies (485) have not been identified, according to Mexican official records.

April 27: It is announced that the wife of the Mayor of Iguala, María de los Ángeles Pineda will not be charged.

July 27: 60 mass graves have been discovered in Iguala, Guerrero, with a total of 129 bodies. None of the remains have been linked to the students.

August 8: Los otros desparecidos, a civilian group lead by Miguel Angel Jiménez Blanco, start looking for their disappeared. This group alone has unearthed over fifty clandestine graves with nearly two hundred bodies in the municipality of Iguala, but none of them corresponds to the forty-three students.  After many threats against his life, Jiménez Blanco is murdered on the 8th of August, 2015.

September 6: A 560 page report is presented, led by an interdisciplinary group of experts (GIEI) and the International Human Rights Commission. The report concludes that the official version is wrong, misleading and has omitted crucial information.

Link to the report.

For an interview with two students who survived