Mexico’s Mass Disappearances and the Drug War (Ayotzinapa: The Missing 43 Students) : What is the Drug War?

What is the Drug War?

The “War on Drugs” grew from roots that spread throughout the 20th century in the U.S., where a growing spirit of prohibition targeted certain substances as foreign contaminants to a pure social body, often linking these substances with minority or immigrant populations and a loss of individual and social control. The term itself was coined by Richard Nixon in 1971, but from much earlier, the U.S. sought to control the use of certain drugs domestically as well as pressuring other governments to take interdiction measures to curb supply to the U.S. 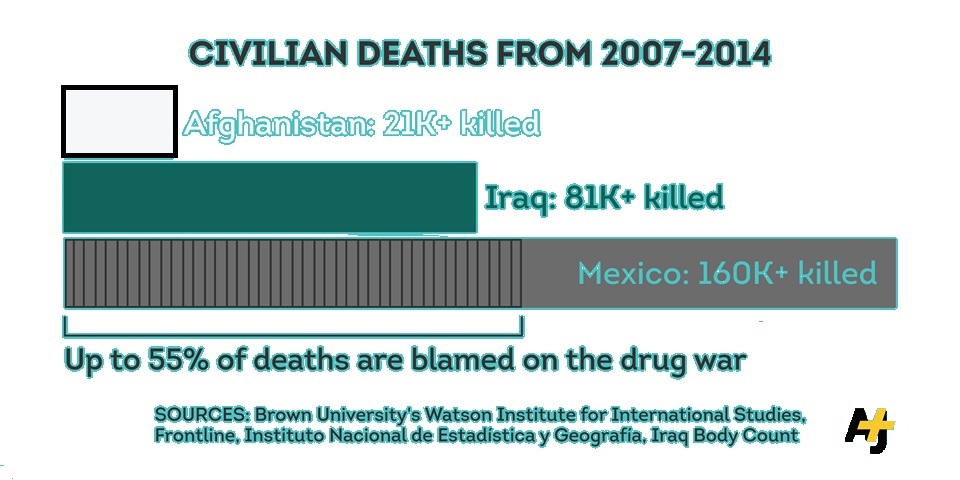 In 2006, Mexican president Felipe Calderón declared a “guerra contra el narcotráfico en México,” known as the Mexican Drug War, which has led to a far-reaching intensification of interdiction efforts involving increasing militarization of Mexican society, a staggering and ongoing death toll (well over 150,000 people and counting), and a pervasive climate of fear and insecurity, all the while appearing neither to stem supply to the U.S. or elsewhere nor to definitively address the cartels’ apparent connections at all levels of government.

Under Mexican President Enrique Peña Nieto administration, the rhetoric has softened, but the death toll has only increased, and the capture of a number of high-profile drug capos has not seemed to slow the flow of money and illicit substances. Meanwhile, continued demand from the U.S., Europe and elsewhere and a lack of economic opportunities and sense of disenfranchisement within Mexico guarantees a workforce of people desperate enough to risk death and worse to support their families or make a name for themselves, feeding an ongoing state of crisis in Mexico.

Some key words or terms that are common for this search: