A guide to Little Magazines in the UW-Madison collection and the many print and online resources available for further research.

Little Magazines are literary magazines that do not follow conventional literary styles or publication models; they emerge as a space in which writers experiment with literary and material forms, forgoing any commercial gain from their work. Little Magazines have given voice to innovative writers who go on to become major artists, authors, and literary critics. Many of these publications are quite rare—they capture major modern writers, often early in their careers, in the throes of literary, artistic, and political movements of the 20th and 21st centuries. This big impact on literary culture belies the “little” in “Little Magazines,” which often refers to the physical size and format of the magazine, the small circulation numbers, the small print runs, sporadic publication, and/or a short lifespan.

This research guide will connect you to the many resources on English-language Little Magazines collected here at UW-Madison and at other universities in the United States, Canada, and elsewhere, and it will provide information on how to search for, find, and view the Little Magazines Collection on the UW-Madison campus. UW-Madison holds one of the most extensive collections of Little Magazines in North America, managing roughly 8,000 different titles and around 1,200 active subscriptions to current publications. This collection offers tremendous opportunities for scholarly study.

Use the tabs above to learn more about:

The Little Review, edited by Margaret Anderson, is an early example of a Little Magazine. Here is v. 5, no. 4 (Henry James Number), published in 1918. Cover image from Derringer Books. 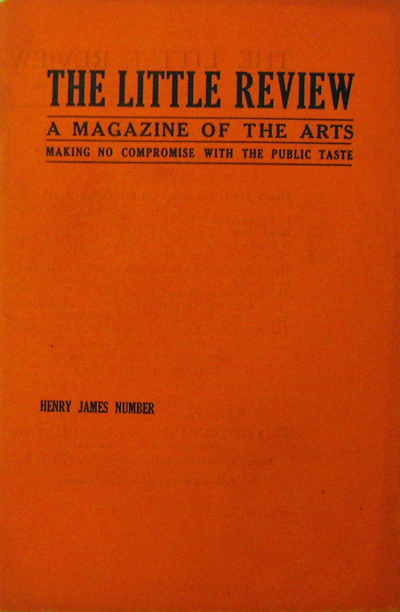