Mapping and Geographic Information Systems (GIS) : What is GIS? 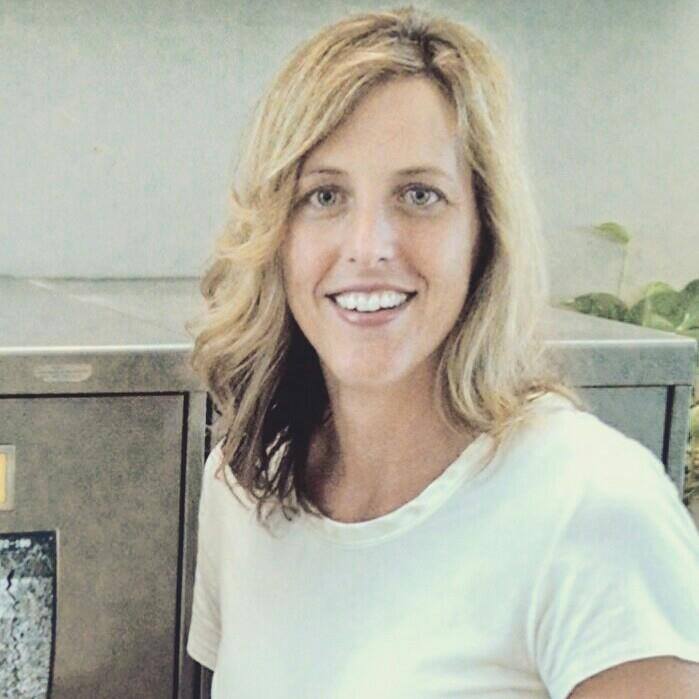 A geographic information system (GIS) is a system designed to capture, store, manipulate, analyze, manage, and present all types of geographical data.  The key word to this technology is Geography – this means that some portion of the data is spatial.  In other words, data that is in some way referenced to locations on the earth.

Coupled with this data is usually tabular data known as attribute data.  Attribute data can be generally defined as additional information about each of the spatial features.  An example of this would be schools. The actual location of the schools is the spatial data.  Additional data such as the school name, level of education taught, student capacity would make up the attribute data.

It is the partnership of these two data types that enables GIS to be such an effective problem solving tool through spatial analysis.

GIS is more than just software. People and methods are combined with geospatial software and tools, to enable spatial analysis, manage large datasets, and display information in a map/graphical form.

What can we do with GIS?

GIS can be used as tool in both problem solving and decision making processes, as well as for visualization of data in a spatial environment.  Geospatial data can be analyzed to determine (1) the location of features and relationships to other features, (2) where the most and/or least of some feature exists, (3) the density of features in a given space, (4) what is happening inside an area of interest (AOI), (5) what is happening nearby some feature or phenomenon, and (6) and how a specific area has changed over time (and in what way).

1. Mapping where things are.  We can map the spatial location of real-world features and visualize the spatial relationships among them. Example: below we see a map of frac sand mine locations and sandstone areas in Wisconsin.  We can see visual patterns in the data by determining that frac sand mining activity occurs in a region with a specific type of geology. 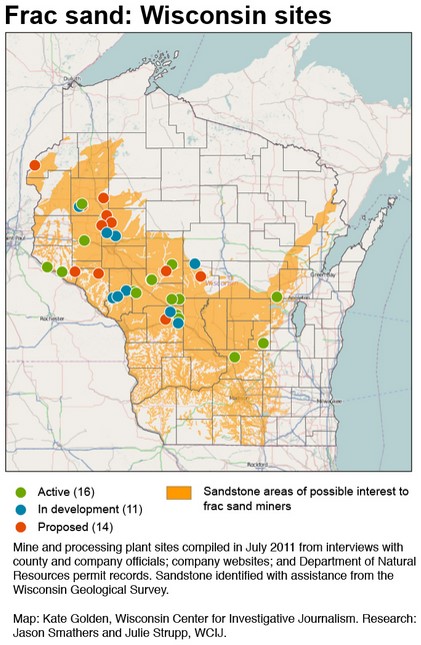 2. Mapping quantities. People map quantities, such as where the most and least are, to find places that meet their criteria or to see the relationships between places.
Example: below is a map of cemetery locations in Wisconsin.  The map shows the cemetery locations as dots (dot density) and each county is color coded to show where the most and least are (lighter blue means fewer cemeteries). 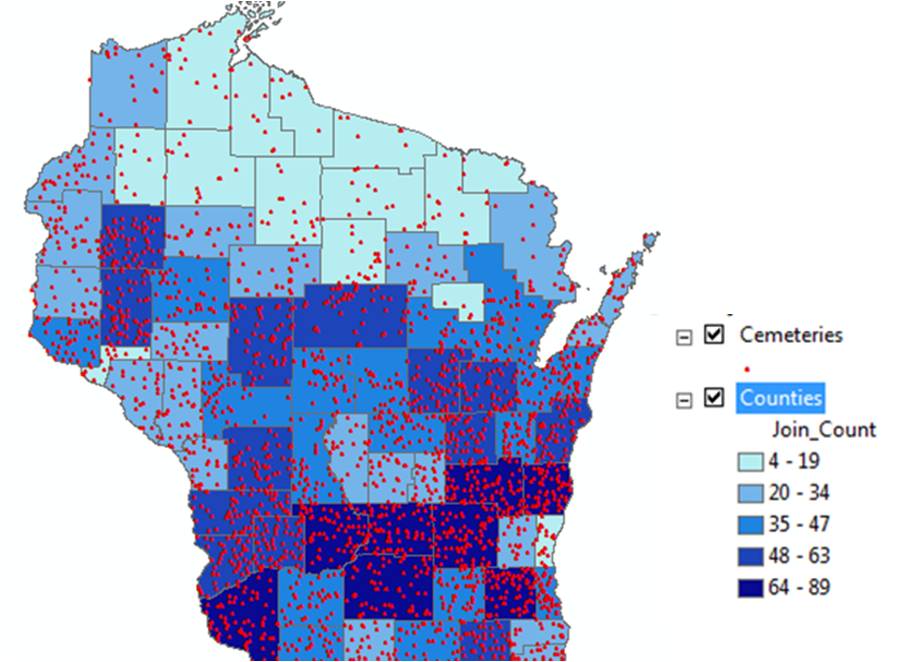 3. Mapping densities. Sometimes it is more important to map concentrations, or a quantity normalized by area or total number.  Example: Below we have mapped the population density of Manhattan (total population counts normalized by the area in sq. miles of census tracts.) 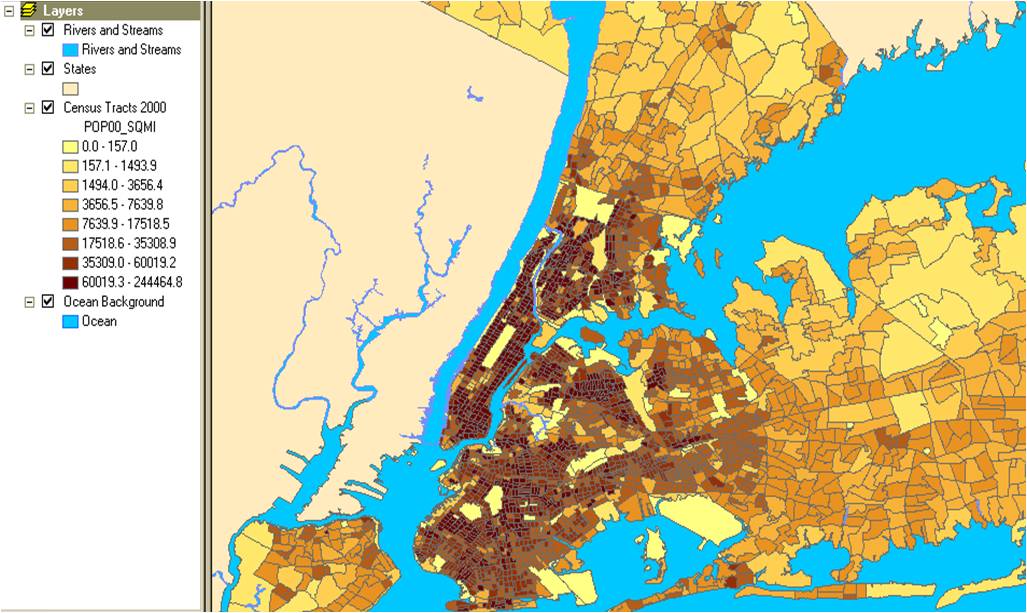 4. Finding what is inside.  We can use GIS to determine what is happening or what features are located inside a specific area/region. We can determine the characteristics of "inside" by creating specific criteria to define an area of interest (AOI). Example: below is a map showing a flood event and the tax parcels and buildings in the floodway. We can use tools like CLIP to determine which parcels fall inside the flood event. Further, we can use attributes of the parcels to determine potential costs of property damage. 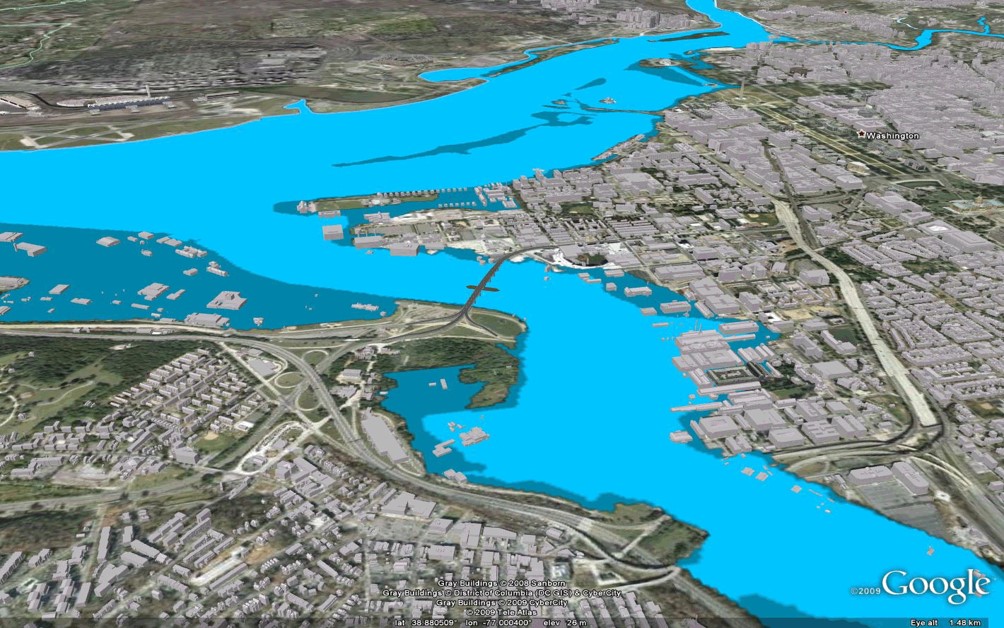 5. Finding what is nearby.  We can find out what is happening within a set distance of a feature or event by mapping what is nearby using geoprocessing tools like BUFFER. Example: below we see a map of drive times from a central location in the City of Madison, WI. We can use streets as a network and add specific criteria like speed limit and intersection controls to determine how far a driver can typically get in 5, 10, or 15 minutes. (Map courtesy of UW Extension) 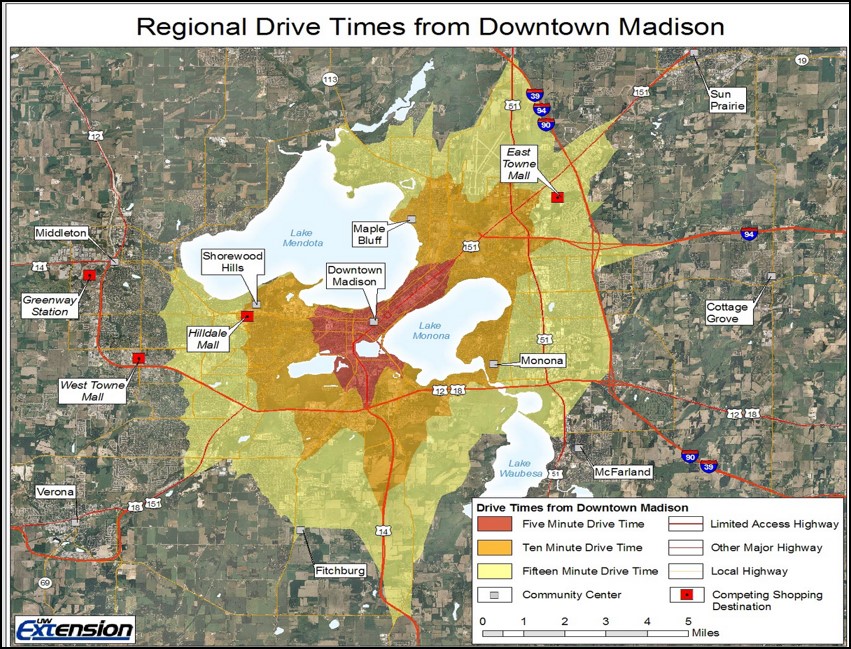 6. Mapping change.  We can map the change in a specific geographic area to anticipate future conditions, decide on a course of action, or to evaluate the results of an action or policy. Example: below we see land use maps of Barnstable, MA showing changes in residential development from 1951 to 1999.  The dark green shows forest, while bright yellow shows residential development.  Applications like this can help inform community planning processes and policies.

Overview
Geospatial data is created, shared, and stored in many different formats. The two primary data types are raster and vector. Vector data is represented as either points, lines, or polygons.  Discrete (or thematic) data is best represented as vector. Data that has an exact location, or hard boundaries are typically shown as vector data. Examples are county boundaries, the location of roads and railroads using lines, or point data indicating the location of fire hydrants.

By contrast, raster data is best suited for continuous data, or information that does not have hard boundaries or locations.  As rasters, the data are viewed as a series of grid cells where each cell has a value representing the feature being observed.  Think of raster data as appropriate for modeling surfaces like elevation, temperature, precipitation, or soil Ph.  These phenomena are measured at intervals (think weather stations), and values in between are interpolated to create a continuous surface. Raster data also includes remote sensing imagery, like aerial photography and satellite imagery.

SHP: Shapefile
The ESRI Shapefile has become an industry standard geospatial data format, and is compatible to some extent with practically all recently released GIS software. To have a complete shapefile, you must have at least 3 files with the same prefix name and with the following extensions: .shp = shapefile, .shx = header and .dbf = associated database file. Additionally, you may have a .prj = Projection file, a .lyr = layer file, and other index files. All these files must be saved in the same workspace.
SDC: Smart Data Compression
SDC is ESRI's highly compressed format, which is directly readable by ArcGIS software.
GDB: Geodatabase
The file geodatabase is a collection of geographic datasets of various types, with the most basic types being vector, raster, and tabular data. There are three types of geodatabases: file, personal, and ArcSDE. Geodatabases are the native data format for ESRI's ArcGIS.
ArcInfo Coverage
An ArcInfo coverage has been phased out and is rarely seen/used today. It has largely been replaced by the geodatabase format.  Coverages do not have an individual file extension. Instead it is composed of two folders within a "workspace" which each contain multiple files. One of the two folders carries the name of the coverage, and contains a number of various .adf files. The other folder is an "info" folder, which typically contains .dat and .nit files for all the coverages and grids in the workspace.
E00: Arc Export or Interchange Format
.e00 files are also rarely seen/used today, but are essentially ArcInfo Interchange or export files, used to conveniently copy and move ArcInfo GIS coverages (see above) and grids (see below). An .e00 file must be "imported" and converted in order to use the data in ArcGIS or other GIS software.

ArcInfo Grid
An ArcInfo Grid does not have an individual file extension. Instead it is composed of two folders within a "workspace" which each contain multiple files. One of the two folders carries the name of the grid, and contains a number of various .adf files. The other folder is an "info" folder, which typically contains .dat and .nit files for all the coverages and grids in the workspace.
Band Interleaved by Line (BIL), Band Interleaved by Pixel (BIP), and Band Sequential (BSQ).
BIL, BIP, and BSQ are formats produced by remote-sensing systems. The primary difference among them is the technique used to store brightness values captured simultaneously in each of several colors or spectral bands.
DEM (Digital Elevation Model)
DEM is a raster format used by the USGS to record elevation information. Unlike other raster file formats, DEM cells do not represent color brightness values, but rather the elevations of points on the earth’s surface.
GeoTIFF
As part of the header of the TIFF file, this provides the Lat/Long boundary extent of the data.
LiDAR
Light Detection and Ranging (LiDAR), is a remote sensing method that uses light in the form of a pulsed laser to measure ranges (variable distances) to the Earth. File formats vary by deliverable - but raw LiDAR point cloud data has a .LAS file extension. A DEM can be one deliverable from LiDAR.