Information about and links to library resources helpful for CHICLA 330: Gentrification in Latinx Communities. Emphasis on retrieving Census data.

Getting Census data for neighborhoods

Instead, you will have to determine which Census tracts and Census block groups make up a neighborhood. (See descriptions in box below.)

The boundaries of a group of Census tracts and the boundaries of a neighborhood most likely won't align perfectly, and it's okay.  This is an issue that's known and accepted among researchers, city planners, and other professionals.

When looking at maps of Census tracts and block groups in Social Explorer, as you mouse over a tract or block group, a box should appear with the number of the tract/block group. I recommend noting the tract and block group numbers for your neighborhood for future reference.

Descriptions based on entries in the Census glossary.

"Place" is roughly equivalent to "city," "village," etc, in the Census.

The following diagram outlines the divisions of census geography, from the nation as a whole to the census block.

This diagram is useful if 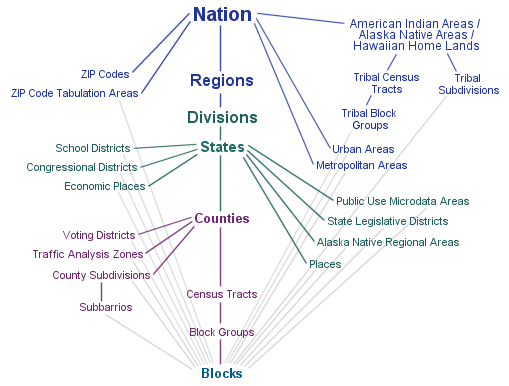 When retrieving Census data, you'll be asked what geographic level you want the data from, whether for the whole U.S., or for Census tracts.

Not all data are available for every kind of geography.

More detailed information about census geography can be found at the following sites: